Eight years into healthcare reform, high-deductible health plans have become the norm. According to the Kaiser Family Foundation, 51 percent of employee-sponsored health plans have annual deductibles of $1,000 or more. Two-thirds of plans on health exchanges have deductibles that exceed $3,500 for individuals and $7,400 for families.As high-deductible insurance policies proliferate, physicians are keeping a close eye on balances owed by patients. Should certain medical specialties or locations be particularly watchful? Yes, according to research from the Athenahealth network, which shows that both the percent of revenue from patients and the percent of patient debt vary by specialty and by location across the provider network. 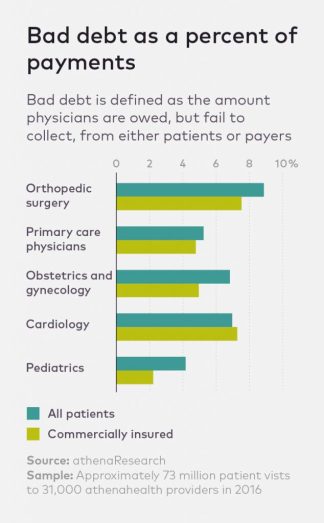 The findings are based on approximately 73 million patient visits to 31,000 providers — including primary care physicians (PCPs), ob-gyns, pediatricians, orthopedists, and cardiologists — in 2016. The data show patient payments account for 16 percent of physician revenue, with the majority of that revenue — 71.5 percent — generated from patients with commercial insurance. Among commercially insured patients, orthopedists depend most on patient payments, which account for 26 percent of their total revenue, followed by PCPs at 24 percent, cardiologists at 22 percent, ob-gyn practices at 16 percent, and pediatricians at 13 percent.

Related: Centricity and EPIC Billing – Why the Accounts Receivable Report is So Important

Orthopedic surgery likewise is the specialty most likely to be affected by bad debt — defined as the amount that physicians are owed but fail to collect from insurance companies or from patients (who account for more than 95 percent of bad debt). Taking the entire sample into account, bad debt represented 6 percent of all physician payments in 2016. For all patients, including Medicare and Medicaid patients, orthopedic surgeons carried 8.7 percent of payments as bad debt, followed by ob-gyns at 6.7 percent, cardiologists at 6.6 percent, PCPs at 5.2 percent, and pediatricians at 4.2 percent.

Another research takeaway: Bad debt is higher in rural areas and is increasing faster than in urban centers.

In rural regions, 7.2 percent of bad debt comes from patient payments, an increase of 8 percent over the past two years, according to data collected from 134 million patient visits to 58,000 Athenahealth providers from 2014 – 2016, across PCP, ob-gyn, pediatrics, orthopedic and cardiology specialties. By comparison, 5.9 percent of debt in urban areas is attributed to patients, and that has increased just 2 percent over the same period. The discrepancies are greatest among PCPs, ob-gyns, and pediatricians. That data squares with what W. Daniel Given sees in his role as chief financial officer at the Minnie Hamilton Health System in Grantsville, West Virginia. “We’ve experienced an increase in bad debt over the years,” says Given. He considers the most likely culprits to be higher deductibles for commercial insurance and a challenging economic environment in rural areas. “Patient debt has always been a concern in our network,” he acknowledges, and “recently, it’s become a greater concern.”

So what can you do? One option is engage a professional medical billing service. Health 1 has been offering Outsourced Centricity and EPIC Medical Billing Services for several years. By MGMA standards all our clients benefit from financial metrics that are in or above the 99th percentile.

We have been happy Health1 clients for over 9 years. The Health1 team is superb: extraordinarily competent, available and solution-driven. They keep us running.

Mitch Feldman, MD, FAAP, CIO, Patriot Pediatrics
We have been a Client of Health1 since 2007. Recently I discovered that our contract wasn't officially or 24/7 service.  I have always made service calls off hours and always receive a quick response,  I just assumed I had 24/7 service because that is what I get. Their knowledge of CPS is second to none. I highly recommend them.

Maureen Stanton, Practice Administrator, Agility Orthopedics
North Shore Pediatrics, PC has partnered with Health1 for over a decade. The response time for emergency situations has been phenomenal and the on-going support and advice on future technology needs has always been accurate and focused on the needs of our practice.  We could not be happier with our partnership with Health1.

David Smith, Practice Administrator, North Shore Pediatrics
We have office hours every weekend and we have to have a firm that can support whenever we need it. We have been with Health 1 for over 7 years and have never looked elsewhere.

Marie Grasso, Practice Administrator, Main Street Family Practice
Over the last 10 years, Health 1 has been our trusted partner. We have come to rely on them to host, manage and maintain our most critical data. I have in the past and will in the future continue to highly recommend all their services.

Jessica Hennessey, COO, Pediatrics West
I have had IT support from Health1 Technologies since their start in 2005. Rahul Patel, Jen Monahan and their team are knowledgeable, responsive and professional. Although I suspect they have other clients, I always was made to feel as though I was the only one!

Marsha Munroe, Practice Administrator, North Shore ENT
Health1 is the first place I go when I encounter a Centricity problem that HAS to have an easier way or another solution. They always seem to have the answer I need. They are always accessible! Their medical billing experience helps them understand the problems I present and find a solution. They are my safety net!